Qutub Minar of Delhi is a beautiful monument, 73 metre high tower of victory. There is also a controversy that it served as a minaret to call the faithful to prayer. The first part of the tower was built during 1193 – 1200 A.D. by Qutab-ud-din Aibak, the first Muslim ruler of Delhi. Later some additions were made by his successors and finally completed by 1368. This is also evident from the different form of materials and styles used at different levels. The tower is also beautified by bands of inscriptions and by projecting balconies supported by decorated brackets.


The Mosque at the bottom of the tower is considered as the first Mosque in India, though there is another Mosque namely Cheraman Masjid of Kodungallur Taluk in Thrissur District of Kerala is also considered to be the first Masjid in India.

Qutub Minar is accessible by road and by Metro Rail. Nearby there is a Metro Rail station by the same name. Indira Gandhi International Airport is the nearest Airport. 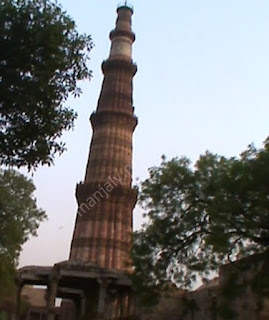 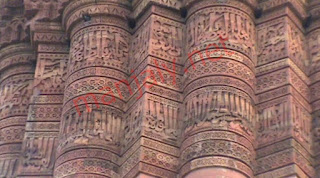 AGA KHAN PALACE
Inside Aga Khan Palace various articles are exhibited related to Mahatma Gandhi including personal items used by Kasturba Gandhi. It was also used as a Prison to imprison the Freedom Movement leaders. It was built by Sultan Mohammad Shah Aga Khan in the late 1890s. Yerwada jail is very close to it.

SINHAGAD FORT
Sinhagad was first captured from a tribal chieftain by Muhammad bin Tughlaq.  Thereafter it was under Shivaji for a short period and then under the Mughals. Then it was recaptured by Shivjaji’s forces under Tanaji, who died in the battle. On his memory, the fort was renamed as Sinhagad  from its original name Kondana.

SARAS BAUG
There is a Ganesh temple in the middle surrounded by water tank like a small lake full of fish and lotus with beautiful green lawns. Many people visit the place with kids for worship in the temple and also to relax on the lawns in the evening. The garden is well maintained. To see a video of a swan with its new born chicks swimming in a pond in side saras baug open air garden go to the link:  https://youtu.be/tzJ1ElqToEQ . It was taken by chance when we visited the place.

Video swan family
RAJIV GANDHI UDYAN (PARK)
Katraj Snake Park in Pune was famous for its collection of snakes, reptiles, birds and turtles. It later became part of the Rajiv Gandhi Udyan (park). There are many species of snakes of which notable collection is a giant King Cobra of about 9 feet length. After it is converted into a general park by name, Rajiv Gandhi Zoological Park (Udyan), a zoo has been added with an open atmosphere for the animals, making it a popular tourist destination, particularly for children. There is a lake in the middle with boating facility (Seasonal).

PARVATI HILL AND TEMPLE
Parvati hill and a Hindu temple is situated near Saras Baug of Pune from where one can get a beautiful glance of the city. The name of the hill derives from the name of the temple namely Parvati. The temple is located so high on the hill that one has to climb a series of over 100 steps to get to the entrance of main temple at the top from where a complete view of the city is possible. At one side of the temple, a museum with the of the Peshwa rulers of the area. The museum contains a variety of things including historical records. The area is also treated as a picnic spot and tourist place.

SHANIWAR WADA
Shaniwar Wada was a royal residence of Peshwa, located in the heart of Pune city. It is in the form of a small fort. The doors of the palace are so strong that it had been designed to resist enemy attacks. Inside it, only the ruins of the glory of the Maratha power is visible. Today it is left with only an imposing outer wall surrounded by the public road always busy with heavy traffic.

KELKAR MUSEUM
The museum has many collections of objects like paintings, handicrafts, armour-suits, musical instruments and many other objects of art and artefacts collected from all over the world.

BUND GARDEN and OSHO COMMUNE INTERNATIONAL
The Bund garden, which is laid next to the river, is a place for evening strolls on the lush green grass. Boating and rowing facilities are also available nearby. Neighbouring to this garden is the THE OSHO COMMUNE INTERNATIONAL situated where public entry is restricted to some area and at particular time.

NATIONAL FILM ARCHIVES MUSEUM
National Film Archives Museum is one of the largest film archives in Asia. The museum preserves all the classic movies and all the details on the classic movie makers. Earlier, it was located inside the campus of the Film and TV Institute of India. Now it is located outside the campus a little away on the same Law College Road. It is also treated as a record keeper of all Films made in India.

NATIONAL INSTITUTE OF NATUROPATHY (NIN)
National Institute of Naturopathy (NIN), Pune is an autonomous body of the Government of India, located very close to the Pune Railway station at Tadiwala Road at a walking distance. It is a historical place now called as "Bapu Bhavan", the old building. Mahatma Gandhi  was treated at this place when he was in Pune by a Doctor who used this place as his Nature Cure clinic at that time. The land and building was later acquired by the Government of India and the present institute is established in the present form retaining the old building. In fact, I was an official visitor of the Institute several times.

FILM AND TV INSTITUTE OF INDIA.
The Film and Television Institute of India (FTII) is an autonomous institute under the Ministry of Information and Broadcasting of the Government of India. It is situated at Law College road on the premises of the erstwhile Prabhat Studio founded by the noted film director V.Shantaram and his friends. The original Prabhat Studio is now kept as a museum with all its settings. Since its inception, FTII has become India's premier film and television institute. Many of its students became actors, directors, etc. in the Indian film industry. As a mention, I had been an official visitor to the institute several times.

LONAVALA/KANDALA
Lonavala and Kandala are two nearby places where temperature remains cool for most of the year. It is a hill station on the way from Mumbai to Pune. Both places are connected by rail and road. It is treated as a summer shelter for the Mumbai residents who cannot afford to go to distant hill stations. Hence it is crowded during the summer season. Karla Caves are reachable from Lonavala by road..

I belong to Thrissur District. Thrissur Pooram Festival is world famous for its elephant procession, fire works and the panchavadhyam, panchari melam (different kinds of instrumental music), etc. Arattupuzha pooram is also famous and predecessor to the Thrissur Pooram. Arattupuzha village is 10 kilometre away from Thrissur town. There is also a museum, zoo and art gallery in Thrisur. St. Thomas Shrine of Azhikode (Kodungallur) where St. Thomas believed to be landed in India in 52 A.D. is also in Thrissur District. There are also some wild life sanctuaries here namely Peechi Dam area, Chimmini Dam area etc.

Western border of Thrisur is Arabian Sea with many beaches like Kothakulam beach of Valapad village, Nattika beach etc. It was here where some parts of the national award winning cenema CHEMMEEN was shot including the Valapad market as it existed then. The film is based on a famous malayalam novel by Thakazhi by the same title and directed by Ramu Kariat. The film was also dubbed in Hindi by name 'Chemmeen Lehren'  and in English 'The Anger of the Sea'.

Thrissur pooram is a main festival celebrated in the Thrisur (Trichur) town which is the headquarters of Thrisur district. The main attraction of the festival is the decorated elephant procession, colourful fireworks, and various instrumental music. Earlier, Arattupuzha pooram was the final point of all poorams in the region ruled by the Kochi Raja(King). But unfortunately one year the Thrissur pooram procession could not move to Arattupuzha because of heavy rain. Then the King ordered that henceforth, the Pooram would be held at Thrissur itself. The present name of Thrisur is derived from the earlier name Thrissivaperoor associated with the main deity Lord Siva of the Temple around which the Pooram is celebrated.


Thumboormuzhi with its dam and the butterfly park located near to it is one of the most famous tourist places in Thrissur District of Kerala also known as GOD’S OWN COUNTRY. It is located about 55 kms from Thrissur town and about 16 kms from Chalakudy town. Frequent bus services are available from these towns to reach there. It is  also very close to the Nedumbassery (Cochin) International Airport which is about 50 kms from the park.  It is on the way to Athirappilly waterfall, another tourist place.


Thumboormuzhi dam is built across the Chalakudy River and the park is on the banks of the river. Now there is a hanging bridge ready for inauguration just above the dam and connecting both sides of the river. Thumboormuzhi is a natural habitat of butterflies of various species of butterfly in the world. During the monsoon, the biggest of the butterflies visit the park and is one of the features of the butterfly park in Thumboormuzhi.
The park also includes river and mountain view, lush green forest view, and also a beautiful garden and children’s park with a restaurant to make the trip comfortable.