Thanjavur District of Tamil Nadu is popularly known as the Delta area and the Rice Bowl of Tamil Nadu. The name Thanjavur, according to legend, was derived from the Mythical Demon Tanjan. This area is rich in art and architecture apart from religion. About the earlier history of Thanjavur, there is no clear picture. The latest history starts from the Chola rulers who developed their kingdom during the period between the 9th and 14th centuries, with Thanjavur as their Capital particularly in the period of Raja Raja Cholan. Thereafter many other dynasties ruled the area namely Pandiyas, Nayaks and Marathas. The great monuments like Grand Anaicut, Big Temple and Serfoji Mahal Library/Saraswathy Mahal Library and so on are all existing today as mute witnesses to the contributions of these rulers to the region. Many of these monuments have been classified as the World Heritage Monuments by the UNESCO.

Places of tourist and pilgrimage interest:

This temple is popularly known as Big Temple. The Great Chola Emperor Raja Raja Cholan I dedicated this temple to Lord Siva in the year 1010 AD . It is surrounded by fortified walls presumed to have been built in later period. The Tower above the sanctum Sanctorum is about 216 feet tall. This tower is regarded as the show case of the Art and Architectural Excellence of the period. Lifting such huge rock pieces to such a height during those period clearly demonstrate the excellent workmanship and technology existed in those days. In short it is a marvellous showpiece of art and architecture. The walls of the outside buildings of the main temple are filled with paintings depicting the stories from the mythology reminding the paintings of Ajanta Caves of Aurangabad, Maharashtra.

Palace is situated about 1km from the Big Temple. Other items like Saraswathi Mahal Library, Sangeetha Mahal or The Hall of Music, Royal Museum, Serforji Memorial Hall and Schwartz Church are all situated either inside or around the Palace.

Poondi Matha Basilica and Velankanni Church are all situated in the nearby areas.


Thanjavur is well connected by Rail and Road. The nearest airport is Tiruchirapalli 56 Kms away.


Read my book: A FRAUD IN THE INDIAN CONSTITUTION http://www.amazon.in/dp/9352353986
Also read my other blogs:
cagreport.manjaly.net
centralemployeesnews.manjaly.net
indiantravelexperience.manjaly.net
publiccause.manjaly.net
https://www.facebook.com/afraudintheindianconstitution
Posted by Joseph Manjaly (M. P. Joseph) at 08:42 No comments:

Poondi Madha Church/ Basilica is a Christian Pilgrim Centre in a small village Poondi, situated in between the two rivers namely Cauvery (Kavery) and Colleroon (Kollidam) of Thanjavur District, in Tamilnadu, India. On 03.08.1999, the shrine was declared as Minor Basilica by Pope John Paul II. Many pilgrims coming to Velankanni Church also visit this place. The famous tourist and Hindu pilgrim centre Thanjavur is very close to this place.

Sufficient rooms are available in the church compound for the pilgrims who want to stay at night. Also a well maintained restaurant run by the Church is also available nearby.

Frequent bus services are available from Thanjavur to the nearest town Thirukattupalli which is about 3kms away from Poondi. From there frequent buses are available to Poondi. Direct buses are also available from Thanjavur / Velankanni to Poondi Madha but is very limited. Nearest rail head is Budalur. Please also remember that there is also a nearby place called Poondi. So while inquiring, specifically mention poondi madha. 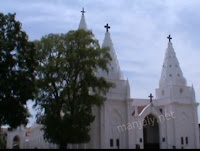 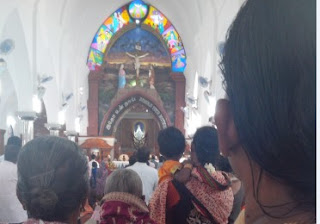