Thrissur pooram is a main festival celebrated in the Thrissur (Trichur) town which is the headquarters of Thrissur district. Though it is a Hindu festival, it is also considered as a cultural event of the whole people of the District.  The main attraction of the festival is the decorated elephant procession, colourful fireworks, and various instrumental music.

LEGEND:- Earlier, Arattupuzha pooram was the final point of all poorams in the region ruled by the Kochi Raja(King). But unfortunately one year the Thrissur pooram procession could not move to Arattupuzha because of heavy rain. Then the King ordered that henceforth, the Pooram would be held at Thrissur itself. The present name of Thrisur is derived from the earlier name Thrissivaperoor associated with the main deity Lord Siva of the Temple around which the Pooram is celebrated. The date of Thrissur pooram is calculated according to the Malayalam calendar and hence normally it comes in the month of April-May. This year it is celebrated on 13-05-2019.

[To read free part of the book  "A FRAUD IN THE INDIAN CONSTITUTION" based on anti corruption activities in the form of my autobiography, go to link at: www.amazon.in/FRAUD-INDIAN-CONSTITUTION-M-P-JOSEPH-ebook/dp/B00SQKTADY ]


Associated with the #Thrissur #Pooram, there are various other activities. Thrissur Pooram Exhibition is one among them. In this exhibition many people are involved. Many organisations exhibit their activities. Many people come here from far away states to sell their products.


Thrissur is almost in the middle of #Kerala and also known as the cultural capital of Kerala.

Few days before and after the Pooram festival, there is heavy rush in the city. So advance booking of accommodation is desirable for those who are coming from far away places.

Thrissur is connected to all over India by rail and road. Kochi and Kozhikode air ports are nearest for air travel. 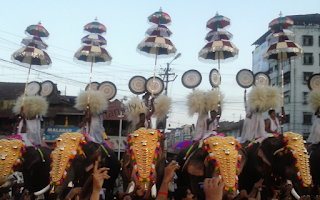