WHEN I SAW TAJ MAHAL FROM AGRA FORT, THE WAY SHAJAHAN USED TO SEE IT WHEN HE WAS KEPT AS A PRISONER AND LODGED IN THE FORT. IN BETWEEN YAMUNA RIVER AND THE HIGHWAY 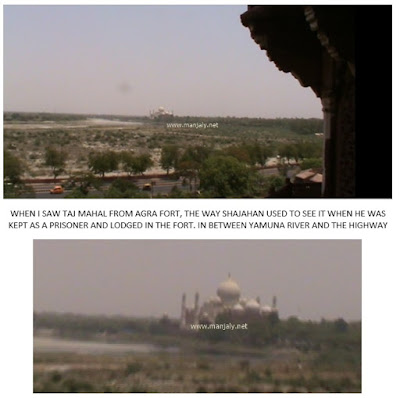 Pontifical Marthoma Shrine is at Azhikode, Kodungallur in Thrissur District of Kerala. It is built in memory of the arrival of St. Thomas where his relics are kept. This is built in the model of St. Peters of Vatican. It was also in the nearby area, one of the seven and half churches was established by St. Thomas.
St. Thomas, one of the 12 Apostles of Jesus, landed in India in 52 A.D., i.e., well before St. Peter reached Rome in 72 A.D with the message of Christ. At that time, it was also one of the main ports in the Malabar Coast known as Muziris. But unfortunately, this port was extinct in 1341 A.D. due to a Tsunami like flood realigned the area. The main reason why he selected this area was that, there were many Jews settled in this area being a commercial center in those days. Therefore, the Christians of Malabar coast is known as St. Thomas Christians to distinguish it from other Christians who were converted after the European Missionaries like St. Xavier, etc. came to India, after the arrival of Vasco da Gama of Portugal landed at Kozhikode (Calicut) at the same Malabar coast in 1498 A.D. St. Thomas Christians are also known as Syrian Christians/Syro Malabar Christians etc., who used Syrian language in Holy Mass in olden days and followed local customs in wedding and other ceremonies as distinguished from the Latin/Anglo Christians who used Latin/English language in Holy Mass and followed European customs in wedding and other ceremonies. Till the arrival of Europeans, St. Thomas Christians of Malabar Coast had also no idea about the existence of the Pope and they were a totally independent Church then, though there was some influence from the Church of Syria due to the commercial connection with gulf countries in those days.
The surrounding area of the Shrine is blessed with natural beauty. South side is River and the west side is Arabian Sea. It is a joining place of rivers like Chalakudy river, Periyar, etc., with the sea. Munakkal beach is also about 1 kilometer away. One of the spectacular scene of Azhikode river side is the use of Chinese fishing net to catch fish. This Chinese fishing net locally known as Cheena vala, was first introduced in the area including the nearby Kochi (Cochin) backwaters were Portuguese.


Road : The Shrine is situated very close to the National Highway NH17.

II.  Watch the youtube video below to know China net and how it is used :