Srinagar, the summer capital of the State of Jammu and Kashmir is also called a city of lakes and Mughal gardens.

Srinagar city which is also called the heart of the Kashmir Valley is located on the sides of Jhelum River. There are several lakes in and around the city of which the Dal Lake is noteworthy and famous. It is full of house boats including a Floating Post Office.

The city is surrounded by the Himalayan ranges on all sides and hence always a cool place. Winters are too cool temperature going below the freezing point with moderate to heavy snowfall. Summer season is warm. Hence during this period, Srinagar is the capital of the Indian State of Jammu and Kashmir and named as the second capital of the State.

Srinagar has many gardens including some Mughal gardens of which famous are Shalimar, Chashme Shahi, Nishat, etc. Nishat garden is located on the banks of the Dal Lake. Other gardens are Botanical garden, Tulip garden etc. But Tulip Garden in seasonal in the sense, tulip flowers are blooming mainly in the month of April.

There are plenty of Hotels including House Boats available in Srinagar with rates ranging from the lowest to the highest. There are Air and Road services from Delhi-Jammu to and fro Srinagar. From Jammu to Srinagar, there is no railway service. From Srinagar, other tourist destinations of Kashmir like Gulmarg, Pahalgam, Sonmarg, etc. can be reached.


The Dal Lake is the largest lake in the city. It is famous for its houseboats and shikaras. Shikaras are mainly used to reach the houseboats. However, many of the houseboats are stationed at the shore and approachable from the land. It is also used for pleasure rides and shopping. There is also a floating houseboat used as a Post Office. 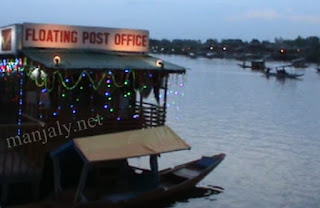 Another notable lake is Nigeen (Nagin) Lake. It is a beautiful lake and located very near to Dal Lake. It is also famous for its houseboats and shikaras.


Nishat Bagh Garden though smaller than Shalimar, is more beautiful. It lies almost in between the Shalimar and Chashma Shahi Garden and on the shore of the Dal Lake. The credit for laying this garden goes to the brother of empress Nur Jahan. 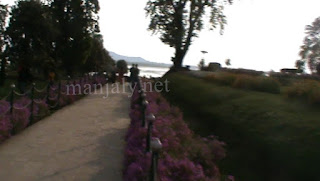 
Shah Jehan is accredited with the laying of Chashme Shahi garden. This is well designed as three tier terrace and a natural spring which waters the whole area from which the garden got its name. From the top of the garden, we can have a long view of the lake below and the surrounding Himalayan ranges.

veiw below link for photo

Shalimar Garden is the queen of Srinagar's many gardens and parks. This beautiful was laid by emperor Jehangir for his beloved wife Nur Jahan. There are fountains laid through the middle of the garden which enhance the beauty of the garden. In the Mughal period, a part of this garden was reserved for the ladies of the royal family. With the picturesque background of the Himalayan ranges, it is worth visiting.